In Him Alone is Our Hope 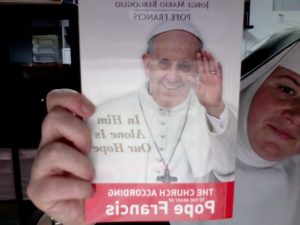 So there are challenging books and then there are CHALLENGING books.  This, my friends, is a CHALLENGING book.  It’s only 136 pages long.  But WOWZERS, it really packs a punch.  The book contains the conferences given during a retreat that Pope Francis (then Cardinal Jorge Mario Bergoglio) gave to the Bishops of Spain.

The title of the book is In Him Alone is Our Hope, but the subtitle says it all: The Church According to the Heart of Pope Francis.  And let me tell ya, his heart and  his vision and his whole person so inspires me.  I love Pope Francis’ honesty and his directness, which pierces the heart without crushing it.  I’ve been amazed that as I read this book I find myself at one and the same time challenged and deeply consoled!  That is often the effect of Pope Francis upon me.  But never so much as in the reading of this book.

Being that it is crunch time for Christmas gift buying, I would suggest that if you are looking for a good book to give a priest…this is it!  Granted, it is a great book for everyone to read, but especially priests!  Since the priestly heart of Pope Francis spoke these words to the priestly hearts of his listeners, then it seems to me that all priests would appreciate this book in a special way.

Mind you, this retreat was given during Holy Week some years back, which makes it excellent Lenten reading. But I wanted to go ahead and recommend it now…as I’m finding it powerful Advent reading as well.

I’ll close with an excerpt just to whet your whistle:

“One of the serious temptations that deprives us of contact with the Lord is a defeatist attitude.  When the enemy encounters faith, which is combative by definition, he disguises himself as an angel of light and starts sowing seeds of pessimism.  No one engages in battle unless he is fully convinced beforehand that he can win.  The one who begins without confidence, has lost half the battle before it has begun.  Christian triumph is always a cross, but a cross raised as a victory banner.  Where can we acquire this invincible faith and be nourished by it?  Among those who are humble.”