Queen Esther and the Contemplative Mission

In order to escape death, it is not enough to be in the king’s house; Queen Esther cannot disown her race, she must labour to save it if she desires to secure her own safety.”  – Abbess Cecile Bruyere

Reading through the book of Esther is moving on many levels…it’s an intriguing story with the twists and turns and triumphs and tragedies.  But my most recent read of the book proved quite fruitful as several integral parts of my own contemplative vocation were brought to the fore (namely MISSION, INTERCESSION and COMMUNION).

Contemplatives are not somehow exempted from the universal and absolute law found in the New Testament: “I chose you and appointed you to go and bear fruit and that your fruit should abide” (John 20:21).  And again, “As the Father has sent me even so I send you”.  As a contemplative nun, I too am called to bear fruit;  I too am sent; I too must “go and make disciples…”.

But how?  How am I to bear fruit, where can I be sent, how can I make disciples if I am living a wholly contemplative and cloistered life???  These and other such questions are often on the lips and in the sincere hearts of those who discern our way of life.  It boils down to this seeming conundrum: How can I live the Gospel AND remain within an enclosure?

But it’s really not a conundrum at all – rather it is a mystery to be explored, one that expands the heart, one that demands trust and a wide/flexible/expansive spirit.

In every authentic vocation, there remains the unchanging  call to holiness.  In the marital journey (from being newlyweds, to new parents, to parents of teens, to empty nesters, to grandparents, right up to being golden anniversary celebrators) – the call to holiness remains unshaken…HOWEVER, we do see the evolution of this call through the years, according to the demands of the present moment and the continual unfolding of God’s Holy Will.   We would never say that a new mother who spends her Mass walking around outside trying to settle her colicky newborn is not living the Gospel!  Nor can we say that a contemplative – who spends her life, hidden within the enclosure wall, interceding for the world – is not going out and making disciples!  Her Beloved has indeed sent the contemplative to this fertile field of monasticism.  He commands her to bear fruit there, right there, in that hidden garden, fruit that will abide.  Though separated from those for whom she prays, she is nonetheless united to all of humanity by a communion of love.

Let them know that, even though they live at a distance, unless in every way they support those who have been appointed by the grace of God and have taken upon themselves the worries of so many affairs, the point of their existence will be lost, and their wisdom will be cut off completely.” – St. John Chrysostom

And so, while our charity is concerned with God – primarily and above all -, the contemplative knows that if this charity does not reach out to embrace the whole Mystical Body of Christ, it will never come to perfection.  And so our charity overflows both in community, with those we meet or have contact with, and also by means of intercession and by offering a prophetic witness to the One Thing Necessary.  This love overflows from hearts that have been filled – so gratuitously – from the very Source of Living Water.

Outside of our very limited contacts, where can this charity pour forth?  To understand this, we must remember that such love that is not limited time or space!  Indeed it overflows to the very fringes of society, to the poor and the addicted, to every nursing home and every rehab facility, to every hospital and every shelter, to the wilds of jungle, to the pounding of mosh pit, to the farthest oil rig, to the darkest abortion mill, to the highest mountain peak where the straying sheep seeks nourishment, and to the loneliest prison cell.  There it flows and bears fruit…though all the while the hidden heart (united to His Heart, the Source of Love) silently makes dinner for her little community, cleans the bathroom, kneels in prayer, mends her habit, laughs with her sisters, and lays out the vestments for Mass.

And so you see, my friends, that a wholly contemplative life is better termed a “wholly apostolic life”:

[Cloistered] Nuns must understand that their whole vocation is fully and totally apostolic:  restricted in no way by limitations of place, or circumstance, or of time;  it extends everywhere and at all times to all that touches, in any manner whatever, the honor of their Spouse and the salvation of souls.” (Pope Pius XII)

And this brings us back to Queen Esther.  She was chosen and set apart by the King.  When a will of hatred was set against her people,  Queen Esther received the counsel of Mordecai: “Do not imagine that you in the king’s palace can escape any more than all the Jews…Who knows if perhaps you were made queen for just such a time as this?” -Esther 4:13, 14).  She was within the confines of the palace, but she was not separated from her people.  Through Mordecai’s words, Queen Esther came to see her life as a thread delicately woven with the lives of her people, by a Providential Hand.  She was where she was for a very specific and far-reaching reason.  She saw the privilege of her call within a context much larger than the castle and the confines of her own life!  Her call, her mission, and her communion with the king and her people were all caught up together in a marvelous tapestry of Providence.

And so, Queen Esther fasted.  And the people fasted with her.  On behalf of her people, as a true heroine, she risked her own life and entered into the presence of the King to plead for their lives…and the King looked upon her with kindness and love.  Becoming a spiritual mother to her people, she brought life where the rancid breath of evil panted only for death. 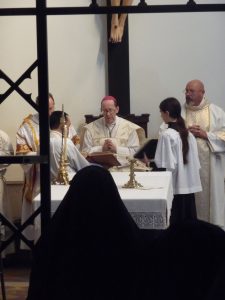 And so, again, in our confused post-Christian era that so desperately needs the saving power of Christ, we hear Mordecai crying out to us contemplatives and to those whom the Lord has called to share our way of life:

Who knows if perhaps you were called for just such a time as this?” – see Esther 4:14

Is it possible to really, truly live the Gospel and be a cloistered nun?  Not only is it possible, but it powerful and ever so necessary!!!

We are called to be like Queen Esther – to fast, to intercede, to go before the King on behalf of our people…and thus to fulfill the Gospel mandate: I chose you and appointed you to go and bear fruit and that your fruit should abide” (John 20:21)