Celebrating the Feast of St. Therese in the Year of Mercy seems very significant to me.  After all, Mercy is mentioned about 75 times in her writings.  Her path to holiness, the Little Way, was cleared and made ready by Mercy.  And, a pivotal moment in her life is when she wrote and made the Act of Oblation to Merciful Love.

When I read anything that Pope Francis writes/says about being a vessel mercy, there is a consistent presupposition present: that before we can give mercy, first we must receive mercy, to experience our own need of the Lord’s Mercy, to know that only His Mercy will ever be enough.

“By the stairway of mercy, we can descend to the depths of our human condition – including our frailty and sin – and ascend to the heights of divine perfection: “Be merciful (perfect) as your Father is merciful.”

“Mercy can be freely accepted and nurtured, or freely rejected.  If we accept it, one thing leads to another.  If we choose to ignore it, our heart grows cold.  Mercy makes us experience our freedom, and as a result, the freedom of God himself, who, as he said to Moses, is ‘merciful with whom he is merciful’ (cf. Dt 5:10).  By his mercy, the Lord expresses his freedom.  And we, our own.”

Keeping these profound thoughts in mind, let us turn now to Therese and see how this dynamic of giving/receiving mercy, living in the freedom of mercy is played out in her day to day life:

In order to unpack this a little, I’d like to quote from Hans Urs Von Balthasar’s “Two Sisters in the Spirit” (this is a great ready ANY TIME, but especially now with Bl. Elizabeth of the Trinity’s canonization just around the corner!).  Von Balthasar is sometimes difficult to quote as his thoughts are developed over pages and his sentences are rather lengthy and complex.  So, to keep the quote to a readable length, I am just jumping in mid-thought…keep reading and it will make sense by the end:

“And this is where the miracle begins.  Not only the miracle of Therese’s shining example but the sheer miracle that makes life in religion possible at all: the strength of heart that the Lord bestows upon His chosen ones, enabling them to cast all their human sympathies and loves into the crucible of ‘living death’, where they are transformed and born again on the spiritual plane.  Therese is misunderstood, badly treated and scorned by the other nuns; it teaches her what the family could never have taught her, how to live through a running warfare of ‘pin-pricks’.  ‘It is less bitter to be broken by the sinner than by one who is just; but, in mercy for sinners, to obtain their conversion, I ask you, O my God, to let me be broken by the just souls around me.’  Her answer to all rebuffs is a most charming smile, a loving glance and her attentive understanding.”

The short of it is: Though Therese calls us to a radical spiritual childhood, her way is not for wimps!  If you think she is, do me a favor and re-read that quote: ‘It is less bitter to be broken by the sinner than by one who is just; but, in mercy for sinners, to obtain their conversion, I ask you, O my God, to let me be broken by the just souls around me.’

What a prayer!  What spiritual honesty!  What heroism!  To be honest, I’m not quite sure I’m ready to pray it just yet!  That’s serious business! – Dear Lord, give me the grace to desire it! 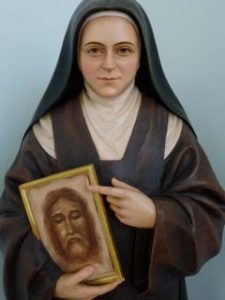 St. Therese is a woman of integrity – there is a core stability present in her (and at so young an age!) that is the fruit of her intimate encounters with Merciful Love.  Jesus is her anchor, her center, her everything.  And so living through the running warfare of pin-pricks, of being misunderstood, scorned, and badly treated became an opportunity to deepen her intimacy with the Lord and shine His light of mercy to others.  (As an aside: it is to be noted that as Therese’s intimacy with the Lord deepened, so did her love for all the Sisters…even and especially those for whom she did not have a natural sympathy.  She loved them ‘supernaturally’ with the very Love with which she saw herself loved!  This is the fruit of mercy.)

St. Therese’s road to sanctity led directly through these purifying albeit quite common life experiences.  The amazing thing about it is that Therese felt each pin-prick (Proof of that is present in the prayer – she admits that it is bitter to be thus treated). Sensitive soul that she is, NOTHING is lost on her (perhaps that is why the Lord permitted her to be tried in a crucible of suffering, because her soul was like a fertile garden in which all of these graces could take root)!  Oh her strong, sensitive, and attentive heart!  Those pin-pricks became the very inroads of grace.  Those pin-pricks kept her clinging to Jesus.  But, let’s not be mistaken, those pin-pricks hurt.

But here’s the thing: she didn’t stop at the “who, what, where, when, how” of the pin-pricks.  Her heart soared to an even higher reality: She saw that in each of these pin-pricks, Mercy was inviting her to something more.  In Vultum Dei Quaerere, we read that contemplatives are “a signpost pointing to a journey and a quest, a reminder to the entire People of God of the primary and ultimate meaning of the Christian life.”  By turning her mind to the conversion of sinners and offering her own pain for their salvation, Therese became a signpost pointing to the ultimate meaning of life.  She once said: “This world is our ship and not our home” and we see her live that truth, with all simplicity, in her hidden life, in community, in suffering, and in death.

I am tempted to go on and on – but since I am the cook, I better go cook or else the Sisters will not have dinner to eat – and what a pin-prick that would be!  🙂 But hopefully, this will whet our appetites to re-read some of Therese’s writings with an eye for mercy, and thus see her as a true prophet and signpost.  Of course this is but a small glimpse into the this Little Way, which has layers of complexity and richness hidden under and in the depths of its simplicity.

St. Therese, be our teacher, our friend, and our intercessor.  Accompany us along the way, for there are times when the pin-pricks of daily life drive us batty and the idea of mercy has no appeal to our hardened hearts.  In those moments, pray for us and be the sentinel of the dawn, announcing the rising a new day, the day of our renewal in the Merciful Heart of Jesus!  Amen.