The Moon, Delight, and Dr. Pepper

During a recent family visit, I had the unique experience of watching my 2 1/2 year old niece drink a Dr. Pepper.  My brother opened it for her and she took the shiny can in her hand and looked like her excitement was going to brim over.  She took a sip with a huge smile on her face.  Then the carbonated deliciousness made it’s way down from her mouth to her tummy.  And she looked amazed.  And she giggled from the depth of her little being while saying “Ouch, oh, owwww!”, feeling the carbonation bubbles make their journey.  Then she looked up at me and with a huge smile said: “Ahhhhhh.”  Totally contented, slightly amazed, wholly enthralled with the experience.  I couldn’t help but laugh.  And that was only the first sip.  This went on as she took a few more gulps – each one an experience of wonder and delight!  I asked my brother if this was her first soda.  His response: “Nope.  She doesn’t get it often, but when she does it’s always the same.  She knows how to live life, huh?”  Um, ya! 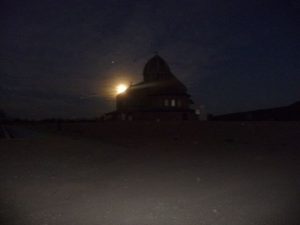 I witnessed a similar phenomenon when she saw the moon begin to shine, as the darkness settled.  “Ohhhhhh!  The moon.  The moon!!!!”  It wasn’t a particularly bright moon.  Nor was it full.  Nor was it, well, anything but the moon.  She spread her arms out, threw her head up, and began spinning around saying: “Oh, the moon.  The moon!”  She spun till she was dizzy…and then the very experience of dizziness began to amaze and amuse her.  And she started trying to get her balance: “Whoa!  Whoa!”  Thud.  She fell on her little bottom and laughed heartily: “The MOOOOON!!!!”  My brother laughed: “She loves the moon.  Does this every night.”

These and other similar scenes have revisited me in the weeks following my visit.  I think of that little girl I love so dearly and I beg the Lord for even a smidgen of her WONDER and ability to DELIGHT, to truly DELIGHT in life, in the Lord, in the simple things that make up every day.

As I reflect, I wonder if St. Francis was a bit like this.  Really!  Read the following excerpt from the Little Flowers of St. Francis…and I dare you not to smile:

One day, as St Francis was travelling with Brother Masseo, who was walking in front, they arrived at a spot where three roads met, one leading to Florence, one to Siena, and one to Arezzo, and Brother Masseo asked of St Francis which road they should take. “The one which God wills,” answered St Francis. Said brother Masseo: “And how are we to know the will of God?” “By the sign I shall show thee,” answered St Francis; “I order thee, by the merit of holy obedience, on the spot where now thou art, to turn round and round, as children do in play, and not to stop or rest until I bid thee.” On this Brother Masseo began to turn round and round, until his head became dizzy, as is wont to happen from such turning, and he fell down several times. But, as St Francis did not bid him to stop, he went on, out of obedience, till at last St Francis said: “Stand still, and move not; but tell me towards which of the three roads thou art turned?” “Towards that which leadeth to Siena,” answered Brother Masseo. “That is the road,” said St Francis, “which it pleaseth God we should take.” As he went on his way, Brother Masseo wondered to himself why St Francis had made him turn round like a child, in the presence of all those who passed that way, but out of reverence to the saint he did not dare ask him.” (from Chapter XI of The Little Flowers of Saint Francis)

Hmmm…does my niece have a little of Francis in her?  Or perhaps it is the other way around.  Does not Francis bear in his soul the great state of wonder and the treasure that is childhood?  Childhood in all its beauty.  Childhood in all its wonder.  Childhood in all its pure amazement.  He knew how to be a child, not so unlike the Son of God…: “I was with Him forming all things: and was delighted every day, playing before Him at all times; Playing in the world: and My delights were to be with the children of men.” (Proverbs 8:31-32)

Our Holy Father Francis, Pray for Us.