St. Francis and St. Clare are our the original Founder and Foundress of the Poor Ladies in Assisi, dating back to the 13th Century. The radical form of Gospel living proposed by Francis and Clare (known as his ‘Little Plant’) has spread throughout the entire world and has taken on many different forms, though always striving to be faithful to the wonderful Patrimony that is ours as Franciscans/Poor Clares. Father Bonaventure and Mother Marie of St. Clare founded a unique “branch”of Poor Clares, whose special charism is perpetual adoration in a spirit of reparative thanksgiving. Venerable Mother Mary of the Cross Morawska, a contemporary of Mother Marie of St. Clare, spread the beauty of this new Order of Poor Clares of Perpetual Adoration to Poland. It was from Poland that the Order took root in Cleveland, Ohio. 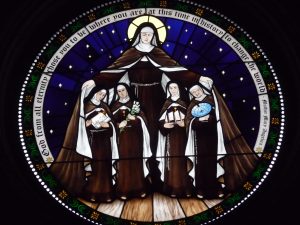 Mother Marie Claire Bouillevaux (our beloved Foundress), under the guidance of a Capuchin Franciscan priest, Father Bonaventure Heurlaut (our dear Founder) desired to begin an Order which united the Franciscan form of living the Holy Gospel with special consecration to Eucharistic adoration in the spirit of thanksgiving.Mother Marie Claire was inspired by the Gospel account of the one leper who returned to give thanks to Our Lord. Perpetual adoration of the Blessed Sacrament has been a continual act of adoration and thanksgiving since the very beginning of the Order. It is through our unceasing adoration that we strive to make reparation to Jesus for all of the sacrileges, abuses, and blasphemies committed against Him in the Most Blessed Sacrament.

In the 150 years since our Founding, the Order has spread from France to Poland to Austria. The first American foundation was established in 1921 by Mother M. Agnes from Vienna, Austria, in the Diocese of Cleveland, Ohio. In 1925 the Cleveland Monastery became one of the first cloistered communities in America to receive the privilege of solemn vows. From this Monastery several foundations were established in Bangladesh and South India as well as other cities in the United States. It was from Cleveland that the new Foundation in Canton, Ohio began. Then from Canton came the foundation in Alabama of Our Lady of the Angels Monastery. And, finally, it was from this Foundation that Our Lady of Solitude was born. 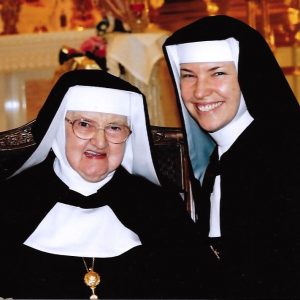 Rita Rizzo (now known as Mother Mary Angelica) entered the Cleveland Monastery at 21 years of age on August 15, 1944. As a Novice, she was part of the new Foundation (Sancta Clara Monastery) in Canton, Ohio. It was there that she made her Solemn Profession of Holy Vows in 1953. By 1962, she was the Abbess of the new Foundation in Birmingham, Alabama: Our Lady of the Angels Monastery. In 1981, Mother Angelica founded Eternal Word Television Network (EWTN), the first Catholic 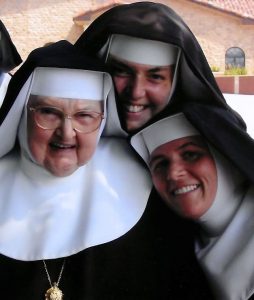 cable satellite network. Then in 1987 she founded an Order of Priests and Brothers, known as the Franciscan Missionaries of the Eternal Word (MFVA Friars), to serve the needs of EWTN and also the spiritual needs of the nuns.

We are blessed to have PCPA Monasteries all over the world, including France, Germany, Bangladesh, Poland, India, and so on. In the United States we also have Monasteries in Cleveland (OH), Canton (OH), and Hanceville (AL). 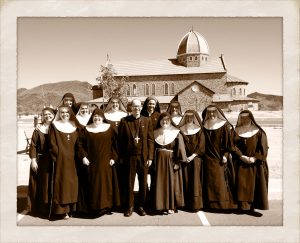