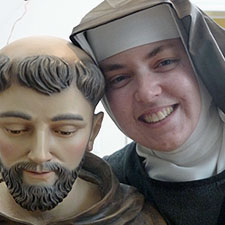 The first glimpse of my vocation as a religious came to me when I was 8. The details are hazy now, but I remember having a dream where Our Lord came to me as a young Boy. When I awoke the next morning I knew without a doubt that He loved me and that, in some mysterious way, I belonged to Him. The realization of His love was tangible to me for quite a few days. Many years would pass before I grasped the full import of that dream.

Thanks to my Mom and Dad’s great faith, I was baptized and raised a Catholic. After my Confirmation the Holy Spirit took me in hand and so began the journey of discerning my vocation. I started to read more about the saints and the Church. The Faith really came alive. At the same time I was determined to pursue my dreams of joining the military. After graduating from Northern Arizona University and being commissioned a second Lieutenant in the United States Air Force, I went to my first assignment on active duty. To put it succinctly, I was miserable. To be honest, even though I was trying to live a more faith-filled life, I was still pretty worldly. It was a big struggle for me. Our Lord is very patient, thank goodness! 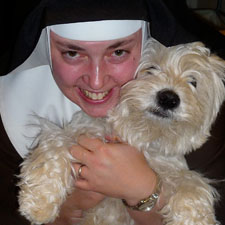 One weekend in May, I attended a Marian-Eucharistic Congress. One of the last scheduled activities was a procession with an exact replica depicting Our Lady of Guadalupe. As she was passing by, I said to Our Lady, rather casually, “Change my heart.” Since most of the people were attending the procession, I headed down to the Adoration Chapel. As I looked at Our Lord and He looked at me, it became clear to me He was calling me to be His Spouse. I decided to go to Confession to a little retired Jesuit priest, told him I thought I had a vocation, and burst into tears! Poor Father, he didn’t know what to do with me!

A few months later (during which I wavered back and forth, back and forth!) I was attending Sr. Marie André’s Investment in Alabama and I was able to speak with Mother Angelica. I was pretty sure she was going to tell me I was crazy and I didn’t have a vocation and that would be the end of it. Well, after about a minute of my pathetic stammering, she said to me, “Yes, you have a vocation.” I was shocked and relieved and then, really, really happy! I headed out to St. Michael’s Hall and at the time, there was a picture hanging there of a young boy. It was actually a picture of the Old Testament Joseph in his multi-colored coat, but when I looked at it, the memory of my dream came flooding back to me. It was a very comforting and enlightening confirmation from Our Lord. 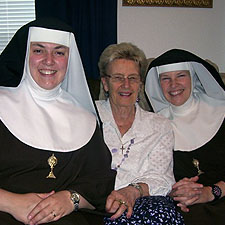 I was just reading in a document from the Holy See where we as religious are called to be vocation animators. I pray my story and the sisters’ stories lead many young people to discern whether Our Lord is calling them to lead a life consecrated wholly to Him. I can only say that during my religious life, with all its struggles and trials, I have never known such joy. Our Eucharistic Lord is this Joy, my very Life.

“I do so dearly believe that no half-heartedness and no worldly fear must turn us aside from following the Light unflinchingly.” ~J.R.R. Tolkien