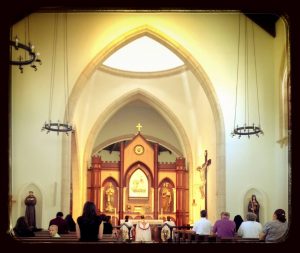 As Poor Clares of Perpetual Adoration, our life is a beautiful melding together of adoration and intercession.

Adoration: As Poor Clares of Perpetual Adoration, we begin in time what we will do for all eternity: Adore Our God!  It is our great privilege to spend our life at the Feet of Jesus in the Most Blessed Sacrament.  To love Him for those who do not love Him.  To spend time with Him for those who do not take time for prayer.  To be His intimate friends and companions at Tabor and in the Garden, at Bethlehem and at Calvary.  To allow our lives to become a “Praise of Glory” and a Canticle of Praise and Thanksgiving!

Intercession: Pope Emeritus Benedict XVI, on June 1, 2011, offered a beautiful reflection on what it means to be intercessor.  He put forth the Old Testament figure of Moses as an icon of intercession.  He says that Moses (and essentially any authentic intercessor) is a man stretched between two loves.  He explains this notion in the following way: “The intercessor, in fact, wants the people of Israel to be saved, because they are the flock that has been entrusted to him, but also because, in that salvation, the true reality of God is manifested. Love of the brothers and love of God interpenetrate in intercessory prayer; they are inseparable. Moses, the intercessor, is a man stretched between two loves, which in prayer overlap into but one desire for good.”

Pope Emeritus Benedict’s  words cannot be added to or improved upon, so we will share with you part of his exhortation verbatim:

“The intercessor does not make excuses for the sin of his people; he does not list presumed merits either of his people or of himself; rather, he appeals to the gratuitousness of God: a free God, who is total love, who never ceases to go in search of the one who has strayed, who always remains faithful to himself and offers the sinner the possibility of returning to him and of becoming, through forgiveness, just and capable of fidelity. Moses asks God to 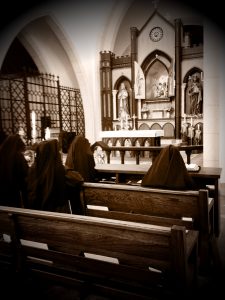 show himself stronger than sin and death, and by his prayer he brings about this divine self-revelation. A mediator of life, the intercessor shows solidarity with the people; desiring only the salvation that God himself desires, he renounces the prospect of becoming a new people pleasing to the Lord. The phrase that God had addressed to him, “but of you I will make a great nation,” is not even taken into consideration by the “friend” of God, who instead is ready to take upon himself not only the guilt of his people, but also all of its consequences.

When, after the destruction of the golden calf, he will return to the mountain once again to ask for Israel’s salvation, he will say to the Lord: “But now, if thou wilt forgive their sin — and if not, blot me, I pray thee, out of thy book which thou hast written” (verse. 32). Through prayer, desiring God’s desire, the intercessor enters ever more profoundly into the knowledge of the Lord and of his mercy, and becomes capable of a love that reaches even to the total gift of self.”

If you would like us to intercede for your needs, please visit our Prayer Request page.