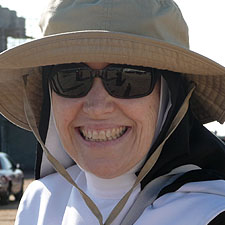 I had an inkling by the time I was seven that the Lord and I were going to be an item: thanks to my mom, His Mom was, from the first get-go, an important part of my life. Since Our Lady brings everyone to her Son, it was just a matter of time before Jesus and I came together. Things became more serious when I was eleven. That is when I turned to the other holy parent and started praying fervently and daily to St. Joseph. I knew what I wanted even back then: I specifically requested nothing less than to marry the ‘perfect man’…and have a large family to go along with him.

Once I got that established with St. Joseph, I became interested in what university I would attend, and what career path I would choose. For a while, I wanted to attend Notre Dame University or the Naval Academy at Annapolis. That quickly fell by the way side since my math skills were, what one politely would say, nil. I did know I wanted to do something in the service of my country. I finished my undergraduate studies and received a Master’s degree. I then took what I had been given, through God’s grace and my parents’ generosity, and applied to (what seemed was) every US federal government agency: FBI, CIA, DEA, Secret Service, and the US Air Force. I would fill out applications, take tests, do interviews, run obstacle courses. 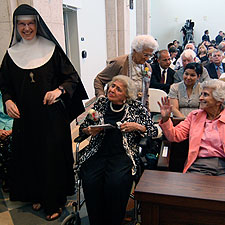 Each time something strange would happen: my applications would get lost or I would fail the lie-detector test (after just having taken it a first time and passing with flying colors). This went on for five years. I was starting to get exasperated with the Lord. During that time, I used to run about 15 miles a week, and many of those miles were littered with tears and discouragement. And how was I supposed to marry the ‘perfect man’ if he never even showed his face to me?!!

But the Lord is in control and He knows how much we can take. Thankfully, He never allowed me to make any rash decisions during my period of waiting (although sometimes that does happen and the Lord can bring a greater good out of it). While I was waiting and wondering what He wanted me to do, He, of course, knew exactly what He was asking. All I had to do was listen and say yes. Yes to the ‘PERFECT MAN’ and to a wonderfully large family that would result from a loving union between bride and Heavenly Bridegroom. 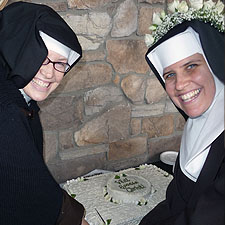 Sometimes we learn the hard way that we do not always know what is best, but the Lord’s timing is always perfect, just like He is. When His call came, it struck me like a bolt out of the blue. I was 28 years old, and up to that point, had lived a full and happy life. By God’s grace I was able to say yes (of which I will always be particularly grateful). Yes to a fuller and happier life. The ‘Perfect Man’ of my girlhood dreams became an eternal reality. The large family I longed for is fulfilled in the unique and special calling of spiritual motherhood as a Poor Clare contemplative and cloistered nun. Is it possible to grow in joy and peace even amidst the trials and sufferings of this life? YES! In fact, I find that peace and joy only increase daily. What an awesome privilege to live in the Presence of the Blessed Sacrament and be able to live in constant anticipation of supreme union with Jesus Christ, the Savior of the world, forever. Nothing, absolutely nothing, compares with You, Lord. 🙂

Mother Marie Andre was installed as the first Abbess of Our Lady of Solitude Monastery on March 19, 2016.